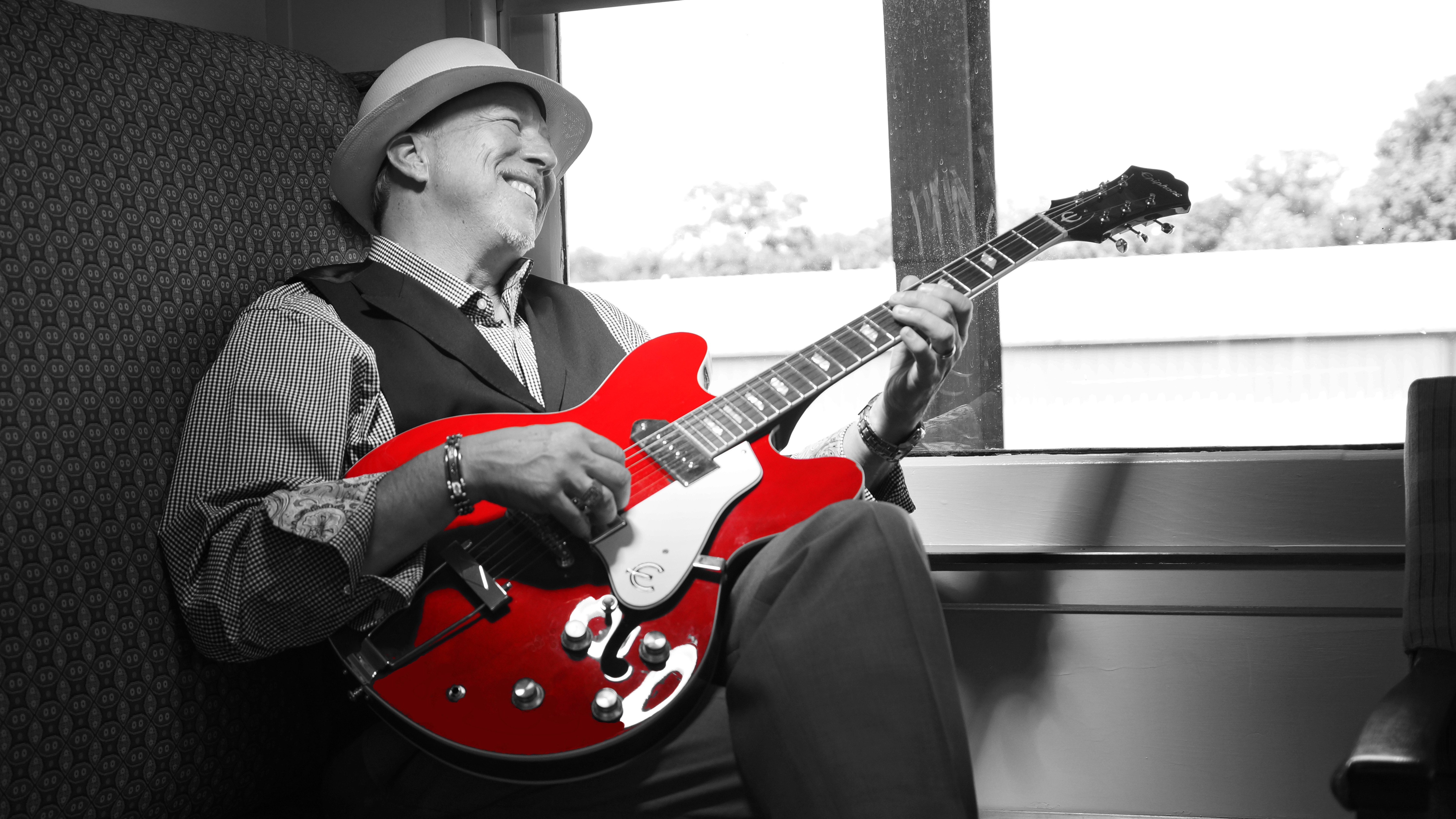 Stacy Mitchhart has built a worldwide fan base thanks to phenomenal live performances, national television exposure, radio airplay, loyal enthusiastic fans and aggressive marketing and merchandising campaigns. His masterful guitar work and strong vocals have been the driving forces behind his successful career. He has won numerous industry awards, released 7 CD's and 1 DVD/CD, and holds 13 major endorsements. Stacy Mitchhart actively tours the US and abroad.

Mitchhart moved to Nashville in 1996 and took up residency as the house band for the hugely popular Bourbon Street Blues and Boogie Bar in historic Printer’s Alley. “Moving to Nashville has been fantastic. I lived in Los Angeles and New York and made a good living, but I’ve played with cats here that I wouldn’t have been able to (play with) anyplace else - James Brown, Keb’ Mo, Steven Stills, Gatemouth Brown, Joe Sample and other cats like that. I even played with John Entwhistle of the Who," Mitchhart says with a chuckle. “I’m a Yankee in Nashville doing the most non-country thing I can do.”

Stacy Mitchhart was born in the suburbs in a middle-class neighborhood in Cincinnati, Ohio. Of that childhood, he recalls the catalyst to his music career: “My friends and I couldn’t play football or basketball because it was raining. I was going through the paper looking for movies. I saw an ad to learn to play guitar. I asked my mother if I could take guitar lessons. The guitar was rented and the lessons were bought. After the first six months of lessons, Dad bought me a guitar and I continued the lessons. I taught my father how to play guitar. I was nine years old then. Eighteen months later I played my first guitar solo at the school choir concert before about 450 people. It was funny because the guitar cord had a short in it and no sound came out the first 30 seconds. I was moving my leg to move the cord to make it work. Finally I find the right spot and had to stand in that one place. I guess everybody felt sorry for me because they asked me to play again. It was my first public performance and my first encore.”

Stacy comes from a musically talented family. His grandfather played the fiddle, his uncle played drums and his grandmother played piano. “I grew up listening to my parents albums - Wes Montgomery, Al Hirt, Herb Alpert, Boots Randolph, Ink Spots and the Mills Brothers. While my friends were listing to R&R, I was tuning into soul stations and jazz. I went to rock concerts, but the music never thrilled me at all. I would have rather listened to Sam Cooke.

“Growing up in Cincinnati, my best friends’ father was my biggest musical influence. Frank Hedges was an unorthodox storefront preacher who played gospel as the blues. He put me in his band. We would always laugh at how he played guitar. He was never formerly taught. He didn’t just strum the guitar, but would smack it. There were these bass notes, drums, everything, I tried to do this in my playing. He played from his soul. He was my biggest guitar influence from a personal level.”

“Bobby Blue Bland is my favorite vocalist. He’s so smooth. He picks good material, does the classics and his own so well. He’s got style. BB King, of course, is a favorite. There’s a lot of him in my playing, without a doubt. At 14 I saw BB and Bobby together. I sneaked back stage and BB gave me his guitar pic. Albert King’s tone and intensity just really excites me. He’s the epitome of the blues guy. Same with Albert Collins, again, it’s tone and the super intense energy in the way he plays. Carlos Santana and Sly and the Family Stone were early musical influences. Wes Montgomery was a big influence. I was never influenced to play note for note. If I tried to emulate something, it was the tone.”

Mitchhart took those early musical influences and started a lifelong career. In 1991, after a few years on the East Coast, time in LA and touring top venues and festivals, Mitchhart returned to his hometown. He put together a blues show called Stacy Mitchhart & Blues-U-Can-Use. The band attracted rock and soul fans as well as diehard blues fans, and was able to fill clubs and venues normally reserved for rock groups. Mitchhart started his own label, Dr. Sam Records, and in 1993 released his first CD Blues Transfusion, garnering airplay throughout the South. In 1994, three months after releasing his first CD, the whole band quit. Mitchhart explains, “During that time, some of our bigger paying gigs were at places where blues was hot. Alternative music got hot in Cincinnati so the only gigs available became lower playing blues gigs. The band said we should try to do more REM to get young kids and I said, ‘No; this is what I do; this is who I am.’ The band went for the money and left. There were no hard feelings. I just put a smaller band together and augmented it on weekends with horn players and played two nights a week in Cincinnati and spent weekends on the road for the next two years. Then I got the Nashville gig.”

Stacy Mitchhart is widely recognized as the best show in Nashville, and as instrumental in the club being awarded “The Best Blues Club of the Year 2000” by the Blues Foundation. Whether playing Nashville or on the road, the thing that Stacy likes most about his audience is it’s wide mix of music fans. “They are basically not blues fans, but come out to see my show because it’s good entertainment. I want people when they walk out of there that not only did they get their money’s worth, but if they had paid twice or three times that amount, they would feel that got their money’s worth.”

He is a showman dressed to the nines, with a teasing smile, quick wit and taste for blue humor. Stacy Mitchhart admits, “ I don’t want to be considered just a blues artist, but as an artist that is blues-based. I do my own stuff – jazz, Latin, rock – all influenced by R&B and gospel. I’ve evolved into much more than just a straight blues artist.”